Telework is now the law of the land for federal employees, and based on the results of a recent survey, it appears that teleworkers nationwide share many of the same likes, dislikes and concerns about working remotely as their federal colleagues.

President Obama signed the Telework Enhancement Act of 2010 last December, after Congress wrestled with the bill for nearly two years (which may feel as long as some non-teleworkers’ daily commutes). Designed to help agencies define and implement effective telework policies, the new law set a June 9th deadline for agencies to establish policies regarding employee eligibility and authorization to telework. The rubber is about to hit the road for telework – with the goal that more federal employees eventually won’t.

So what did we learn?

The national findings support a recent White House Office of Personnel Management (OPM) study about telework, which found the most frequently cited barriers to telework at federal agencies continue to be office coverage (64 percent), organizational culture (49 percent), and management resistance (47 percent). When compared with respondents not able to telework, more federal teleworkers perceive supervisors as supportive of their efforts to balance work and other life issues (82 percent versus 74 percent) and agree that their workload is reasonable (60 percent versus 58 percent ).

Additionally, our study found that the top three tasks workers are unable to perform while working remotely are the ability to make phone calls (39 percent), participate in video conferences (28 percent) and being able to easily determine the availability of colleagues (17 percent). The most annoying pet peeves among teleworkers are the inability to speak face to face (43 percent) and lack of a quick response (30 percent). Meanwhile, the OPM study found that one of the major obstacles to federal adoption of telework is employers’ concern that the lack of in-person, on-site interaction could hurt job performance. 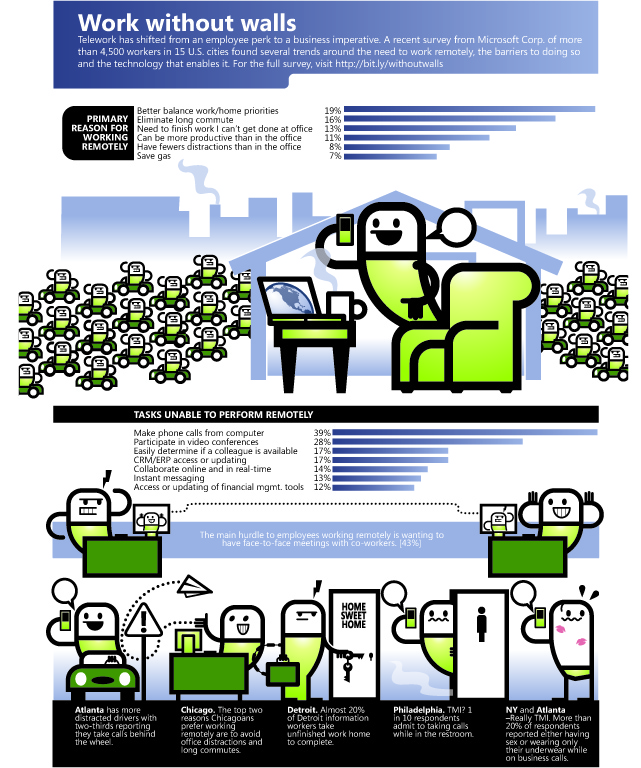 Technology has the power to address these challenges, and Microsoft is committed to enabling workers to connect, collaborate and share data from almost anywhere through unified communications tools like Microsoft Lync, and cloud productivity through Office 365. Microsoft’s presence technologies, which I’ve discussed on Microsoft’s Futurefed blog, offer managers the tools they need to assess employee availability in real-time and communicate via instant messenger, video chat, email or phone.

Our study’s fascinating overall and city-by-city insights into employee perspectives are especially important for the federal government, which faces one of the greatest telework adoption challenges in the world. The Bureau of Labor Statistics’ most recent data states that of the federal government’s roughly two million civilian employees, 85 percent work outside the Washington, D.C. metropolitan area. That’s around 1.7 million people – more than live in Philadelphia, the fifth-largest city in the United States.