A decade ago, the rest of Europe watched enviously as Estonia strengthened its democratic infrastructure, using the latest technology to become the first EU nation to introduce online voting.

Its successful transformation to Europe’s first full e-government is especially noteworthy given that in 2007 – just as Estonia was embarking on its digital journey – the country suffered a massive cyberattack that shut down government, banking and media websites. However, Estonia was not to be deterred. Rather than backing away from technology, the country learned valuable lessons about cybersecurity and went on to become a world pioneer.

In theory, Estonia should have set a best practice for the rest of Europe. But fast forward ten years, and reports of hacking and interference during recent elections in the United States and Europe have cast a spotlight on cyberattacks on democratic processes and institutions. And with the European Parliament elections approaching in May 2019, the EU is anything but united on its approach to technology. The European Commission is spearheading efforts to ensure each member state is aware of potential risks to their electoral environments, but countries remain cautious.

“For a number of different reasons and a number of different contexts, the wave of euphoria from the early 2000s has tempered to a large degree,” says Steven Martin, a senior election adviser with the OSCE’s Office for Democratic Institutions and Human Rights. “An understanding has developed that you can’t just blindly use technology to enhance people’s trust in the process – you have to build trust first and then follow that up with technology.”

Trust is crucial. Even just the perception of election interference can jeopardize the result and undermine the credibility of the entire democratic process.

“The systems themselves don’t have to be penetrated to impact the process,” says Martin. “Regardless of if there is an actual attack, the perception of an attack can be sufficient for people to cast doubt on the election itself and its integrity.”

Governments continue to explore the potential of technology in elections, aware that getting it right could help engage voters, increase accessibility and further secure certain aspects of the process. The question remains, however, about how governments can maximize the benefits of technology while minimizing the risks.

Interest in this topic peaked following the “hanging chad” fiasco that occurred during the 2000 U.S. Presidential elections when machines used to punch holes in voter cards proved ineffective, leading to a controversial recount in the state of Florida.

However, the first efforts to digitize electoral processes began even further south, before the word “chad” had even entered the global lexicon. Already in the 1990s, Mexico was pioneering the use of biometric data for voter registration cards, while Brazil was one of the first countries to introduce electronic voting machines.

For Sean Dunne, an international consultant with 20 years of experience working on elections for the UN and other organizations, Brazil remains one of the best examples of how technology can bring great benefits to a nation when successfully implemented.

You can take a Brazilian voting machine into a favela or the Amazon jungle, and it will run off a car battery

“Brazil developed an in-country system only after they had completely re-engineered the institutional context in which to hold elections,” he explains. “They trained prosecutors and they set up a new electoral tribunal specifically able to deal with digital forensic issues. They piloted and evolved the system, until they were using it for trade unions and for soccer clubs to elect their committees. They socialized it progressively.”

“You can take a Brazilian voting machine into a favela or the Amazon jungle, and it will run off a car battery,” he adds. “They invented a system customized to their circumstances.”

For European nations with long-standing democracies and deeply entrenched systems, building a new system from scratch was not so feasible.

“This is something that grew very organically in Europe – sometimes too organically in retrospect,” says Peter Wolf, Technical Services Manager with the International Institute for Democracy and Electoral Assistance. “A lot of countries developed solutions starting from faxing in, to different types of software for results transmission and results aggregation, and then they just kept building and expanding from election to election.”

As a result, a variety of technologies were deployed – with mixed results. 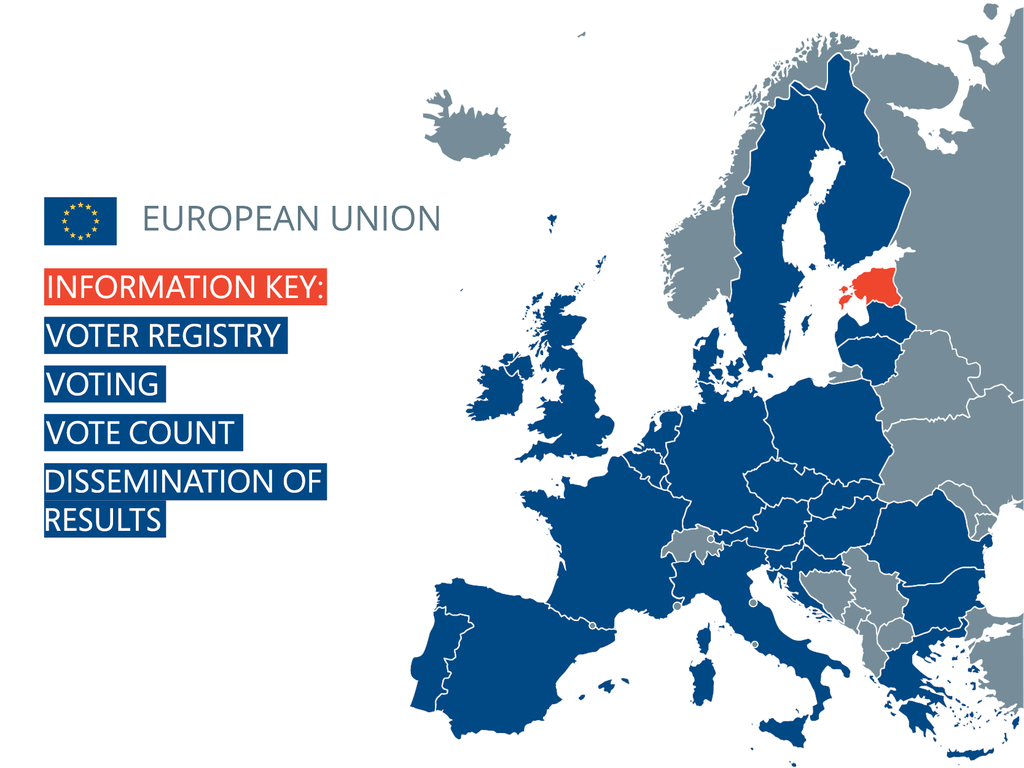 In 2002, Ireland spent €54 million on electronic voting machines, but concerns about their susceptibility to tampering and a lack of paper trail meant they were never used. Germany also introduced e-voting machines around the same time but had to withdraw them after the Constitutional Court ruled that they had not proved to be open and transparent.

Norway meanwhile trialed internet voting in both 2011 and 2013 but decided against continuing because of public perception about the security of the vote.

Today, Estonia, with its population of 1.3 million, is the only country in the EU to offer its citizens the possibility of universal internet voting. People have had the option to vote online for 10 years, and like in Brazil, they introduced it gradually, starting with trials at municipal elections and expanding from there. And the system is continually being assessed and updated to make sure the latest technology is being used to secure the building blocks of democracy. Crucially, people trust the system.

“The entire country is proud and keen on this image of being e-Estonia,” says Wolf. “The population trusts technology a lot, and this might not be the case elsewhere.”

No other European country comes close to Estonia’s comprehensive embrace of technology, but there are others taking steps towards a digital future.

Although not an EU nation, Switzerland has introduced online voting in some places, with plans to expand trials in coming years. In the United Kingdom – which will not take part in the European Parliament elections because they occur after Brexit – Scotland has opened a public consultation on electronic voting, internet voting and other advanced voting technologies.

France briefly offered overseas citizens the option to vote online. But that changed after the 2016 U.S. Presidential elections, when evidence emerged that Russia had hacked the Democratic National Committee to try and damage Hillary Clinton’s campaign. France was one of the first countries to respond, declaring that electronic voting would not be allowed in its 2017 Presidential election. Despite the precautionary actions to protect the elections, it was instead Emmanuel Macron’s campaign team who was targeted. The team announced that tends of thousands of internal emails and documents had been hacked and released online.

The Netherlands, which held an election a few months before France, also took precautions, announcing that all ballots would be counted by hand to insulate the process from cyber-interference. The Dutch experience, however, illustrates the many different factors that influence the use of technology in elections: they had already stopped using electronic voting machines in the 2000s, after investigations revealed they could be susceptible to fraud.

In many ways, the Dutch response was intended to reassure the population. After all, even a low-tech election using paper-based voting is not immune from outside influence. While the focus is often on proliferation of fake stories via social media, in a 2016 Dutch referendum on an EU-Ukraine agreement, Russia was accused of sending people to infiltrate town hall meetings to influence debates.

These processes make it more efficient – voters get to see the results more quickly and you have faster forecasting about what the results will be.

Today, it is impossible to run an election entirely without technology.

But online voting and e-voting terminals are just one small piece of the electoral jigsaw. Technology has a role in everything, from political parties’ online presence, to the social networks where voters share their views. Technology can help demystify the political process and increase participation. And almost all EU nations use technology to some extent to maintain their voter registration lists, collate results from across the country, or disseminate them.

“These processes make it more efficient – voters get to see the results more quickly and you have faster forecasting about what the results will be,” says Julia Schuetze, a Project Manager with the Stiftung Neue Verantwortung think-tank and co-author of a report on Securing Democracy in Cyberspace, which makes recommendations on how to protect data-driven elections.

Looking to the future, technology can help reach isolated communities, increase accessibility for voters with disabilities and potentially increase voter turnout by energizing a younger, more tech-savvy generation that has traditionally been less likely to register. SMS technology can help get people to the polls and the Internet is an indispensable tool in the effort to reach all communities with voter education. Biometric technology can help make the voter registration process more secure.

What is important, experts say, is working out where technology can make the process smoother and more efficient, and then applying it to each country’s unique situation.

In Estonia today, about 32% of the population cast their vote online. The solid foundation on which the system was built has enabled such a level of trust that even if there is an attempt at cyber-interference, the population remains confident that the government has the tools to deal with it. The discussion today is not about whether or not to use technology in elections. It is about fostering a climate of cybersecurity and trust and making the necessary structural and cultural changes to ensure citizens get the most out of technology while knowing that their democratic rights are protected.

In the second part of our election series, out next month, we will look at the potential for interference in upcoming European elections, and examine how governments can better protect themselves and make societies more resilient.

Electronic voting: What Europe can learn from Estonia