This post was originally published on the Chi Hack Night blog.

The Chi Hack Night, Chicago’s weekly event to build, share and learn about civic tech, has been going for 3 ½ years. We’ve been an inspiration for dozens of hack nights in other cities and are constantly referenced as the largest, most successful and productive civic hacking community around.

Over the years, many have asked me, “how can we create or nurture the same kind of community in our city?”

This is a great question, and one that I’ve struggled to answer. At the 2014 Socrata Customer Summit, I took the approach of showing by example what we do in Chicago.

However, after talking to other hack night event organizers, and seeing some of our organizational structure copied by other groups, particularly Code for America, I believe the Chi Hack Night has a unique and effective way of organizing events and empowering volunteers.

This post is my first attempt at synthesizing and sharing this model. While I don’t have a full-on playbook for you, we have come up with 10 lessons that we think make the Chi Hack Night model work.

If you’re already familiar with the Chi Hack Night, you can skip right down to the 10 lessons.

If you’ve never been to one, it will help to know what goes on here every week. So let’s dive in!

What happens at Chi Hack Night?

The Chi Hack Night starts every Tuesday at 6pm. We meet in the Braintree office on the 8th floor of the Merchandise Mart in downtown Chicago. The event is free, and the invitation is open to anyone, especially folks who aren’t programmers.

As people arrive, we gather in theBraintree auditorium.

Because we’re meeting during the dinner hour, food is always provided, usually pizza or empanadas. We want to make sure people are happy and fed, and eating together is a great way to break the ice and bond with other attendees. 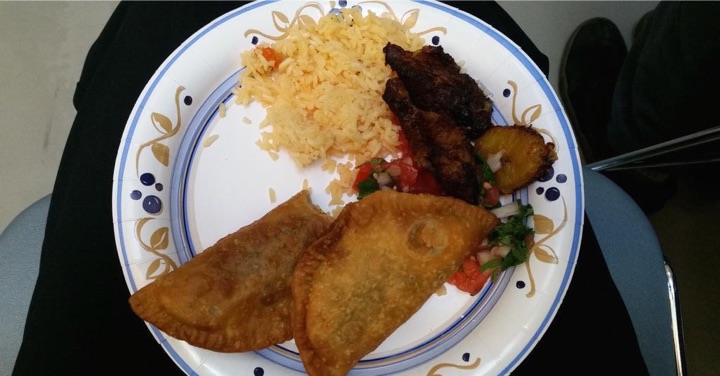 We get started around 6:15pm with a brief welcome and introduction to the event and then kick off the introductions.

Everyone in the room introduces themselves and tells the group why they’re here. We’ve done this since the beginning when there were 4 of us. We still do it when there are 150 of us. As with the food, our goal is to break the ice and get people to start talking. 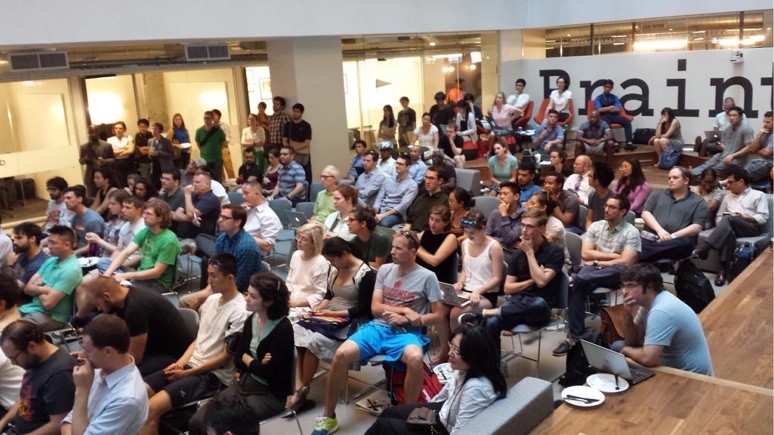 We record these announcements in our weekly meeting notes and agenda Google Doc. Here’s an example fromChi Hack Night #180: Covering schools through public records and data. 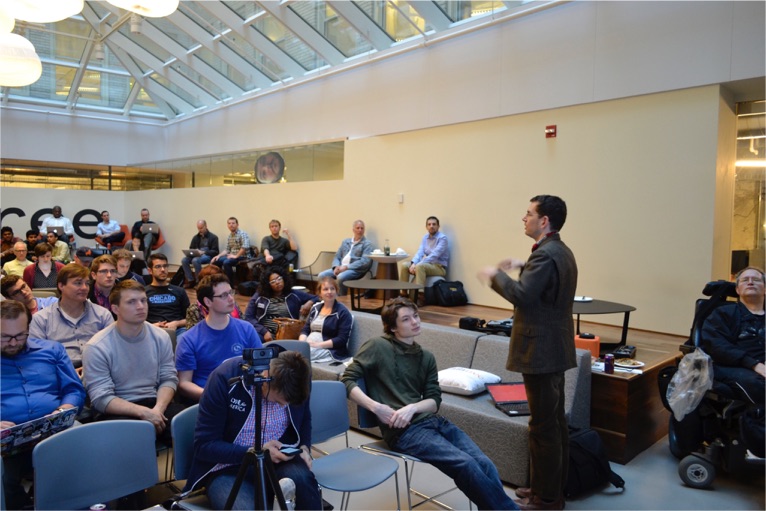 Just about every week, we have a feature presentation that lasts about 15 minutes, with an open question & answer (Q&A) session after.

Presenters can be any government agency, non-profit, company or group who’ve made use of open government data or built a civic technology application. Anyone can propose a talk, and I often reach out to presenters who would be a good fit. For every speaker, we provide some clear speaker guidelines. 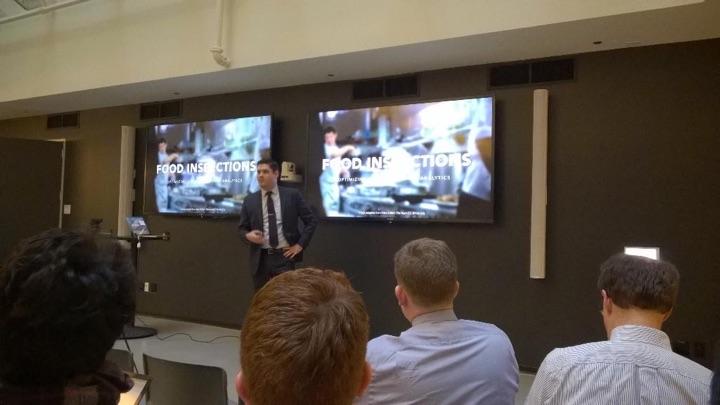 Once the presentation wraps up, the format of the event switches up to what I’d describe as a mini-hackathon. People are invited to break off into groups and work on projects.

As we’ve grown from just 4 attendees to 100, we’ve had to add a bit more structure to this. Anyone is welcome to start a breakout group. The only requirement is that you take ownership of the group make an honest attempt to keep showing up every week. 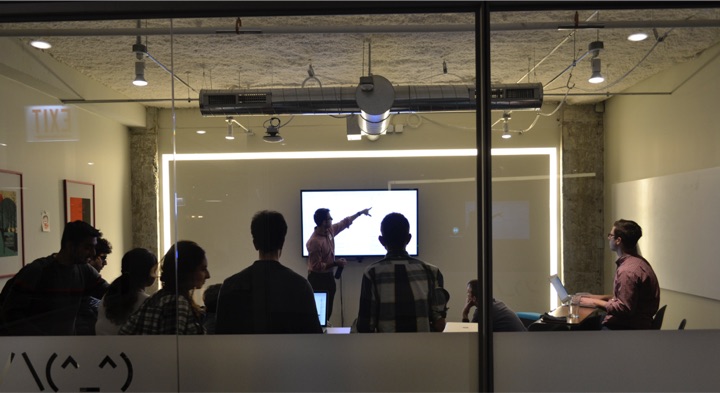 Breakout groups that last more than a few weeks are listed on theChiHackNight.org website, and are divided into two tracks: learning groups and working groups.

When 10:00pm rolls around, we all head home and do it all over again next week.

The above agenda is what we’ve found works the best for us. It has evolved over 3 ½ years and is tailored for an event with 100 attendees. So don’t go an try to follow it letter-for-letter and expect success.

Instead, I’ve come up with some general lessons we’ve learned as we’ve grown:

1. Meet at the same time and place every week

This is the foundational rule of the hack night. When Juan-Pablo and I started it back in 2012, the goal was to create a consistent place and time to get work done on civic apps. It turns out this had another, more profound impact: it enabled us to build up a community.

Meeting every week at the same place meant people could start incorporating it into their schedules. It meant they only had to remember that on any Tuesday at 6pm, they could go to the Merchandise Mart and there would be a hack night going on. And it meant that momentum on projects and collaborations could be built up with much less effort. Didn’t get your work done tonight? There’s always next week.

Have you ever been to an event where you didn’t know anyone? It’s pretty intimidating, even for extroverts, to get acclimated to a new community. So to help with this, we work introductions into our weekly agenda. They’re mandatory, even when we have 150 people in the room. This is worth every minute we spend on it.

3. Organize from the bottom up

As the hack night has grown, more people would approach me to ask what projects they can and should work on. We struggled to do this for a while, but it always seemed fragile and sub-optimal. What we really wanted was for people to take charge and lead projects of their own.

It wasn’t until Summer 2014 that we figured out how to do this well: self-organized breakout groups. By empowering anyone to start their own group, we simultaneously solved a major organizing problem, while giving people an opportunity to grow and expand their role within our community.

Now, I just run the event and create a space that is fun, safe and inclusive. The breakout groups and the projects that come from them run themselves.

4. Have a variety of sponsors and partners

The Chi Hack Night has four food sponsors — DataMade, Code for America,GitHub and Dev Bootcamp — and one hosting sponsor, Braintree. Over the years we’ve had several others, but one thing has stayed consistent: there are always several.

We have multiple sponsors for a couple reasons:

5. Focus on doing over talking

This one almost goes without saying, but let’s say it anyway. The Chi Hack Night is a place to get stuff done. It’s a place to learn by doing. It’s a place to roll up your sleeves, get your hands dirty, and build the things we think need building.

Talking is important, but it should always be in service of doing.

We define civic tech broadly as “tools to create, support and serve the public good.” A lot of things fit inside that category including open government,govtech, smart cities, data journalism, community building and modern activism.

We want people from all over Chicagoland with all different kinds of backgrounds to be a part of Chi Hack Night. Our diversity of skills, ideas and points of view are our strength.

To nurture that diversity and expand it, we strive to have presentations that span these topics.

Every week, about 30% of our attendees are brand new. They’ve never been to a hack night before. We want to orient them and get them onboarded to breakout groups. To this end, Christopher Whitaker runs his Civic Tech 101 session, and we have set up a variety of learning groups that are beginner-friendly.

The newbies may not come back next week, but we try our best to make sure everyone always gets something out of our events.

8. Listen to the community

As we’ve grown, our community has changed. We’re not just 4 nerds sitting around a table anymore, and it’s important to hear from everyone if they have feedback to give.

To facilitate this, we have been running open Leadership Council meetings every month since summer 2014. Anyone is welcome to join and discuss new ideas and ways to make the hack night better.

We took this another step further in September and held our first community feedback session.

This one is tied very closely to #8. Listening to the community is not enough, you have to act on it. We run the Chi Hack Night just like we build our civic apps: with constant feedback and rapid iterations. The event agenda described above is the result of constant tweaking over years, and you can bet that it won’t be the same a year from now.

This one, even though it’s last, is perhaps the most important and easiest to lose sight of.

The thing that ties all these reasons together is fun. If it isn’t fun, then why are we spending our Tuesday nights together instead of all the hundreds of other things we have going on in our lives?

If you’re a Code for America Brigade captain, or an organizer for a civic tech event, I’ love to get your take on this. Think I’m wrong? Have a rule to add? Get in touch with me at [email protected].

I plan on doing more writing on the Chi Hack Night model, including case studies of some of the projects that have come out of our community, so stay tuned!

This post was based on a talk that I gave at the 2015 Code for America Summit called Lessons from organizing the Chi Hack Night.

Derek is a civic technologist and one of the leaders of the open government community in Chicago. He is founder and partner at DataMade, a company that tells stories and builds tools with data, co-founder of Open City, a collective that makes civic apps to to improve transparency and understanding of our government, and organizer for the Chi Hack Night, Chicago’s premier weekly event for building civic technology with open data.